A premature elegy for "eavestrough"? 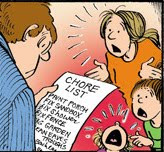 I've been in Ohio for a while, enjoying family festivities and, as I always do, renewing my acquaintance with my native dialect. So it was an especially appropriate time to read the Newsweek piece by Joan Hall, chief editor of the Dictionary of American Regional English, on the progress of that wonderful (and almost complete) 45-year-old project.

DARE's research, wrote Hall, shows that despite popular belief, mass communication has not wiped out local varieties of English. However, she said, "Certain regional terms have been weakened by commercial influences, like Subway’s sub sandwich, which seems to be nibbling away at hero, hoagie, and grinder."

This reminded me of the "For Better or Worse" cartoon above, from June 13, in which John is given a honey-do list that includes "Clean eaves troughs." (I write it as one word, myself, but I see the spellchecker doesn't approve.) Eavestroughs was a common synonym for gutters when I was young, but like the regional names for submarine sandwiches, it seems to have been marginalized by national advertisers, who made gutters the generic term.

DARE's map shows eaves trough (also known as eave trough and eaves troth) widely disseminated across the Northern states and throughout California, though not in Eastern Massachusetts. The dictionary quotes a 1961 comment from the journal American Speech: "Eaves troughs and eaves … trail far behind the commercial term [=gutters]. Their markedly greater use by [older] informants suggests that both terms are on the way out."

Maybe, maybe not. Lynn Johnston, creator of  "For Better or Worse," is Canadian, and thus not on DARE's map, but apparently she's been living in dialect regions where eaves trough continues to thrive.

*Thanks to Visual Thesaurus and to Mr. Verb for the link.
Posted by Jan at 7:40 PM

Extending the range of your survey, I've lived in Western Mass. forever, and have never heard "eave trough." It occurs to me that it might me convenient to have a word that didn't carry the ambiguity of 'gutter,' but I guess this doesn't seem to be a problem [My computer's dictionary (New Oxford American) only lists the eave-type under nouns].

I suppose this means that OH is spared multiple "Mr. Gutter" businesses; "Mr. Eavestrough" doesn't seem to make it somehow.

I've never heard of it, either (in NJ and New England). I thought from the title that this was going to be about an eggcorn for "eavesdrop"!

"For Better or For Worse" is currently running a mixture of old and new material, so it's possible that that chore list is one that was written decades ago, and thus not necessarily a reliable indicator of current usage. However, I can attest that eavestrough is indeed alive and well at least in Ontario (and probably in other parts of Canada as well, but I can't say for sure). I write it solid, too, but then I'm not trying to make it fit on a little piece of paper in a comic strip character's hand.

Note that "For Better or Worse" is recycling strips. This one is from 1981. So it's a use of dialect from almost thirty years ago and may not reflect current usage.

Re the recycling question: Yes, Johnston is currently mixing old strips with new ones, but the website indicates that the "eaves troughs" one is new, not archival.

@empty: Well, the "eaves" is the same in both words; "eavesdropping" is lurking under the roof overhang to listen to private conversations.

I'm a native and lifelong resident of Georgia, and I've never heard the term. I like it, though-- it's more descriptive than simple "gutter".

Jan - your Newsweek link needs fixing (or "needs fixed" as they say here in Pittsburgh).

Thanks, Kevin -- the link should work now. I'm fond of "needs fixed," which occasionally made an appearance in my neck of the woods as well.

"Gutter" dates back at least to the 14th C according to the OED:

2. A shallow trough fixed under the eaves of a roof, or a channel running between two sloping roofs, to carry off the rain-water.
1354 Mem. Ripon (Surtees) III. 92 In mercede j hominis mundantis guteres circa ecclesiam pro ij vicibus 6d. 1382 WYCLIF 2 Sam. v. 8 The goters of the hows eues.(OED)

Jan is from the part of Ohio known as the Firelands, whose white inhabitants came from the Connecticut. The white poeple of the Killbuck Valley, many of them German speakers, came from Pennsylvania by way of the Ohio River, the Muskingum, and the Walhonding.

Here in Ithaca,NY and Tomkins County, though, "eaves trough" is the term. The white people in this area originally arrived from the East to take control of the military tracts awarded after the Revolutionary War. They, too, seem to have come at least in part from Connecticut.

In any case, "gutter" has a long history in English and can be spoken swiftly and easily. I like it and would not miss "eaves trough."

I am from Ontario, Canada, and write eavestroughs (one word). In fact, I just wrote an entire novella, (amazon.com Wake - by Matthew Fries plug plug), and one second ago had a panic attack thinking I had spelled eavestroughs wrong, thinking: "why didn't you just say gutter, or spell it eaves trough?" Google took me to your blog, and I am quite relived to find out it might be a regional thing. Gutters is a terrible word, by the way. They are troughs handing from the eaves, thus they are eavestroughs. (In my mind, anyway.)

I had never heard the word in this part of the USA (mid-Atlantic) until I started watching Holmes on Homes and its spinoff Holmes Inspection. The shows are Canadian productions; Mike Holmes is based in Toronto, IIRC. But it took me this long to find out what those Canucks were saying. I couldn't make it out. As for me, gutter is handier than eavestrough; it's shorter, and it's what I grew up with.

I'm from neither Canada nor Ohio, but Michigan (but some of my ancestors are Canadian, others from Virginia-West Virginia-Pennsylvania), and it's always been "eavestrough" in my family. To me, "gutter" refers to that area alongside the road where water collects and then goes into the storm sewer system! (But I understand when someone uses the term in the context of his or her home/roof system, etc.)

Hey there! I'm from southern Wisconsin where my family and extended family has always referred to eavestroughs to refer to the rain collection system on the roof. I've never actually seen it spelled, but I'm about to go put some on my house here in North Carolina. My boyfriend looked at me dumbfounded when I said that I wanted to put up a rain barrel and some eavestroughs! I love the word about as much as I love the word davenport, also used by my family to describe the living room couch. :)

I was talking with my 81-yr-old mother about where the term "eaves trough" came from, because I had only heard it used in my own family. I grew up in Eastern Washington state, and most of my ancestors came from the northern states or Canada. I Googled the term, and up popped your blog post. I'm happy to see we're not the only ones familiar with the dying term.

I used the term eaves trough in New Hampshire and received only blank stares from locals. Many of the houses here don't have them and, as a result, water slides off the roofs in sheets when it rains. I think someone here called them "rain gutters." Yuck.

I'm a little confused by what a eavestrough but I think I am just going to Google it. Thanks for sharing this information.

I run a (free) grammar checker service, spellcheckplus.com and have made sure the spelling "eavestrough" is indeed accepted. Being from Ontario, Canada, I have no other word for it!

I am of English and Scottish heritage, born in Canada and have always used eaves trough but understand gutter terminology, LOL. It makes sense to me that the eave of a roof has a trough to collect rain.