Over at Unclutterer, it’s Unitasker Wednesday, the day to make fun of a “helpful” device that has only one (limited) purpose – aside from its main function, that is, of lightening your wallet a bit.  Today’s pick, the Dipr, certainly qualifies; it’s a scary-looking hook designed to hold an Oreo (or other sandwich cookie) while you dip it into your glass of milk. 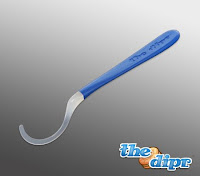 But the Dipr may have another problem besides superfluity: Its name. When I read “The dipr” in the post’s headline -- lowercased, as in the logo* --  I was expecting something completely different: A new twist on, of course, the diaper.
None of the commenters had that reaction, though, so maybe it’s just my Midwestern accent leading me astray; where I come from, diaper is often two syllables, rhyming with (appropriately enough) wiper.
*In my copyediting days, I opposed the common editorial impulse to approximate logo styles in print. You aren't required to cap IKEA or put a star (or asterisk) in Macy*s. As Bill Walsh put it in "The Elephants of Style," there was a time when "editors and even writers knew that logos are logos and English is English. 'You want all caps?' an ink-stained wretch with a green eyeshade might have asked. 'Go buy an ad!'"
Posted by Jan at 8:04 PM 19 comments:

Well, OK, it was really ice cream and death on the billboard I recently spotted along I-90 in western Pennsylvania, but how could I pass up an Eddie Izzard allusion? Anyway, the ad -- for a local ice cream shop -- promised this:

The ice cream probably is good (they can afford a billboard!), and in most circumstances, "to die for" is cliched enough that its literal sense is almost invisible. But to a potential customer who's speeding along the interstate at 65 or better -- to this one, anyway -- "to die for" isn't the most appealing pitch.

This reminded me of another encounter with unappetizing food language, earlier this year: At a San Francisco restaurant, one of the main course offerings was "Terrorized New York steak." Not even our local hosts could tell us what it meant; we wondered if it was some kind of invention based on "terroir," but that seemed unlikely at a restaurant that had carefully labeled one menu category with the plural form "Bruschette."

So what was it? The waiter explained that the animal itself was not terrorized (at least not by the chef); it was the steak that was handled roughly, first slathered with a strong blend of peppers and herbs, then charred on a hot grill. The violent language seemed incongruous in that health-minded, easygoing city, but apparently the recipe has been around for a while. Maybe nobody minds so long as they reserve the terror treatment for New York steaks.

And speaking of terror, how about that Vermont Country Store catalog? I've gotten used to the idea that the homey purveyor of old-time staples -- like other catalogs aimed at aging Americans -- is selling sex aids along with the bunion pads and caftans. But when you sell a "personal massager," for whatever part of the anatomy, it pays to be sensitive about language. You probably shouldn't keep insisting, for example, that the product boasts "pinpoint accuracy." (Ouch.)

I was holding off linking to my final Word column till the Boston Globe web team added hyperlinks, which has now happened. So I got scooped on my own farewell by John McIntyre (thanks for the kind words, John!)

Some of you knew already that I was thinking this 14th-anniversary month might be a good time to exit the print scene. I had cut back to alternate weeks back in late 2009, when Erin McKean joined me to coauthor the column.  And I missed quite a few weeks this summer; I've spent much of it in my Ohio hometown, first to see my ailing mom, then -- after she died in June -- to hang around the ancestral home basking in her (still palpable, still comforting) presence, and to help my brothers and sisters sort things out.

I'm not at all bored with (or bored of) the language beat, just with cranking out 800-word columns, which (however new the material -- and it's not always new enough) tend to be structurally repetitious. (I can't imagine how Bill Safire did it for 30 years.) So I hope I'll be blogging more consistently, once we settle into the new normal.

As for the column, Erin will keep contributing, but there's no word yet on who or what will fill the alternate weeks I've just vacated. Send nominees to the Ideas section editor, Steve Heuser, at sheuser@globe.com; maybe he'll break down and confess that he's already signed my successor.

Sorry about the excess of parentheses here. See y'all soon!