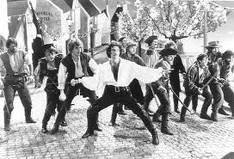 Kevin Kline, according to this interview in yesterday's Globe, is a language stickler. Alas, the actor, funny and intelligent as he may be, is as conventional in his peeves as Miss Thistlebottom could have been:


He holds his nose at "transition" used as a verb. Ditto for "impact." "I can’t stand 'lay' and 'lie,'" said Kline. "No one lays down. They lie down. And then there are hyper-extensions like 'I' instead of 'me.'"

Wait, what's that again? "Hyper-extensions"? Surely Kline meant to say "hypercorrections" -- that's the usual label for constructions like "He gave my wife and I tickets to the game." (At least, it's the usual label among people who think such usage betrays a speaker's attempt to sound educated. There are other theories, and not every grammarian pretends to be a mind reader.)
I'm gonna go ahead and hope it's a transcription error. Even if he deserves it, I'd hate to see my favorite Pirate King brought low by McKean's/Skitt's/Hartman's Law of Prescriptivist Retaliation.
Posted by Jan at 9:07 PM