One Asian under guard, invisible

Geoff Nunberg wows me every time with his "Fresh Air" language commentaries -- they go down so smoothly on the air, yet they're complex and meaty essays, well worth a second listen (or read). In the latest one, Geoff not only explains the difference between the "under God" in the Gettsyburg Address and the "under God" in the Pledge of Allegiance, but introduces the lovely term hapax legomenon to the public radio audience. Read it or hear it here.
Posted by Jan at 4:19 PM 2 comments:

Today's Globe column is about the recent word ban at Chicago's WGN-AM. I didn't go into the differences between spoken and written English, but thinking about how "banned words" for the oral and written media might differ did prompt a moment of what may be insight.

I've always wondered why so many editors dislike some for "about," as in "some 300 marchers waved signs." (The OED's earliest citation for the usage is from Boethius, in 888, and there's no record of its being disparaged) But when I saw some on the WGN list, I thought, well, it's not all that common in spoken English; maybe editors have decided that since they see it only in print, it must be a journalistic tic.

I don't hear it that way at all. I agree that "fled on foot" is journalese (though I don't despise it), but "some 300" has had a long and flourishing career in non-journalistic prose, and really shouldn't be stigmatized.

On another subject entirely, I was pleased that none of my editors boggled at my use of "ill-wishing," which I think of as more British than American English. I used it as a simple opposite of "well-wishing," but in the book where I first encountered it in the '70s -- Fay Weldon's novel "Down Among the Women" -- it's used in the more specific sense "put a curse on": "Now Emma has ill-wished the hens."

But now I'm wondering, is ill-wishing is actually more common in BrE? It's not all that old, it turns out; the verb isn't recorded until the 19th century. The OED's cites are British, but Google Books has an example from an 1862 issue of the Boston Review: "The neighbors, sore perplexed at the strange movements of the child, came to the conclusion that some one must have 'overlooked' or 'ill-wished' her."

Maybe Lynneguist can enlighten us; but even if not, you should be reading her blog, including today's discussion of dishwashing and teakettle-heating in the British and American dialects.
Posted by Jan at 11:33 PM 4 comments: 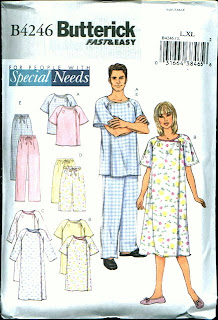 And yes, aren't you glad to know you can sew your own hospital johnny? The pattern is for sale at Butterick.com and here.
Posted by Jan at 10:57 PM 6 comments:

Tomorrow's Word column revisits the duck tape/duct tape argument, and none too soon: Since the last round -- Safire and I* both wrote about it in 2003, Michael Quinion in 2005 -- the notion that "duck tape" evolved into "duct tape" has gained adherents (to judge by Web cites). This is no doubt because the official history of Johnson & Johnson (which claims to be the tape's inventor) has now endorsed it:


The tape was originally called duck tape, for its water-repelling properties. (Duck ...water ... get it?) And, as the story goes, the fabric used to make the tape was called cotton duck. Soldiers soon discovered that the tape was incredibly useful in repairing just about anything that needed repair, from jeeps to planes to tents to boots. As time went on, "duck" morphed into "duct" because of its use in the postwar building industry to help connect … you guessed it … ductwork for heating and air conditioning.

But I still couldn't find a shred of evidence for this, so I asked the J&J librarian, Margaret Gurowitz, what it was based on. Her reply, which  arrived after the column went to press, says, essentially, that there is no evidence -- it's just company folklore.


Unfortunately, I don't have any additional information on the transition from "duck" to "duct" tape. ... Because duct tape was invented as a wartime product for the military during World War II, there was no product launch and publicity of the kind that would happen with most products. ... The story about it being originally called "duck" has been passed down verbally here, and it also can be found on the many websites devoted to duct tape. Since it was originally developed as a waterproof tape to keep ammunition cases dry, and it was said to have been made using cotton duck fabric, the story of the origin of its name does make sense.

In fact, I found evidence that J&J had developed silver duct tape (and used it on ductwork) by 1938, well before it would have been needed for ammunition cases. So if anything, the story is shakier than it was last time I looked.** As I conclude in the column, there was a fabric tape (duck tape), and later there was a sticky tape (duct tape), but "explanations" of their connection are still just guesswork.

*Behind a paywall at the Globe, but reproduced here.

**Update: Dammit, Michael Quinion, whose eyes are clearly better than mine, points out that the pub date of this article is not 1938 but 1958. Doesn't affect the conclusion, but puts a serious dent in my satisfaction. However, a 1958 date is evidence of a different sort: The article shows men taping ductwork and describes the tape as silver colored, but does not call it "duct tape" (or "duck tape" either).
Posted by Jan at 3:10 PM 4 comments:

I hope I'm wrong about this, but I think "All Things Considered" just reported on Mary Schmich's famous 1997 column, popularly known as "Wear Sunscreen," without mentioning her name or authorship. Audio isn't up yet, but here's the intro on the NPR website:


In the late 1990s, a manifesto falsely attributed to Kurt Vonnegut made the rounds of e-mail boxes. It came to be known as "Wear Sunscreen" — and even spawned a hit music video from movie director Baz Luhrmann. A similar, but more vicious, manifesto is now going viral. It was penned by firebrand NYU professor Scott Galloway to a student who arrived to his class an hour late. We give this latest diatribe the Luhrmann-like musical treatment.

The original Chicago Tribune column is here. Like I say, I hope I misheard; what kind of reporter would mention the misattribution and not the true source? (I know, I know, all kinds of reporters would. But it's not OK.)

Update, 7:30 p.m.: It's even stranger than I thought; the report mentions that the original "essay" came from the Chicago Tribune, but it does indeed leave out the author's name (while mentioning Vonnegut and Luhrman!). Bizarre.
Posted by Jan at 6:18 PM No comments:

Does NGD need a name change?

The spirit was willing: For National Grammar Day, it was marching with Mark Liberman and the Modal Auxiliary Corps in their assault on the Dark Tower of official peevology. But the flesh was weak, laid low by a nasty bronchitis as grimly persistent as the over/more than myth. Between coughing fits, though, I roused myself to enjoy the NGD observances of my fitter compatriots.

Neal Whitman, for example, argued that singular they is here to stay, so why not adopt a sensible set of rules for it? "Everyone did their best" -- fine. "If someone was pregnant I would be sympathetic to them" -- silly. (The piece is at Visual Thesaurus, subscription $19.95 a year, 14-day free trial available.) And Gabe Doyle used the occasion to debunk 10 usage beliefs (about hopefully, which/that, healthy/healthful, etc.) that thoroughly deserve debunking.

But there was plenty of evidence to buttress Arnold Zwicky's pessimism about a good-guy takeover of NGD. One of the day's lowlights, noted by Geoff Pullum, was the grammar poem that won the NGD poetry contest. (Perhaps it won because the other, better efforts were mostly about punctuation?) The New York Times's Learning Network blog bravely suggested we reclaim the holiday: "Boycott the red pen that ensnares us in syntactical games of right and wrong, and pick up a piece of literature, any piece of literature, and explore the English language with fresh eyes." Within the first 10 comments, though, we find "I was taught in school that you should never use 'But' to start a sentence" and, even sadder, "As a college professor, I’ve seen my fair share of  'your' instead of 'you are,' 'to' instead of 'too,' and other fundamental grammar errors." (That's not grammar, Professor.)

HuffingtonPost showed itself equally ignorant, offering 11 photos alleged to show "The WORST Grammar Errors Ever" and inviting readers to vote on them. Most of the 11, however, were the usual banal punctuation and spelling errors -- "student's for McCain," "Its the Law," brakes for breaks, their for they're. The only clear example of grammatical error -- a sign reading "Now we taking job application" -- seems very likely to be the work of a non-native speaker. (I hope that some of the 627 commenters have also made this point, but I can't bear to look, not till I get my strength back.)

All this makes me think that the problems with National Grammar Day may be baked into its very name. Most usage complaints are not about grammar at all; shouldn't an observance dedicated to spreading enlightenment start out by making this clear? Or should NGD simply be renamed, more accurately, National (Get Over Your) Peeve Day?
Posted by Jan at 2:03 PM 6 comments: