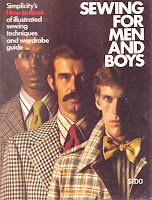 This Simplicity sewing publication from 1973 – a thrift-store treasure discovered by my sister – is a hoot, especially for those of us old enough to remember boyfriends in suede bell-bottoms. But how would you interpret its title?

So I was impressed to find, on reading the introduction, that Simplicity was aware of – indeed, was embracing, tentatively – the ambiguity of its title. "If you’re a woman sewing for the men in the family, or if you’re a man making it on your own, we've written this book for you," it assured readers.


But the women were getting jobs instead of sewing for the men in the family, their daughters were demanding admission to shop class instead of Home Ec., and that optimistic pun, "making it on your own," never really applied to sartorial ambition. In the end, we achieved equality by outsourcing our belt loops and buttonholes (and our hand-crafted bookends, too). We've come a long way, baby ...

Peeving is not journalism

There have been several excellent responses* to the BBC's dimwitted attack on words it (often wrongly) labeled as Americanisms. But as a journalist, I especially enjoyed Gabe Doyle's critique (at Motivated Grammar) of the piece, including this summary:


I’ve been a bit preachy about journalistic integrity of late, but I have to say it once more. Journalism should never consist solely of asking people their opinions and then reporting it. Repeating lies (or mistakes) that are obviously lies (or mistakes) without noting that they do not fit with the truth is not journalism, or at least isn’t what journalism is supposed to be. Journalists are supposed to make truth clearer, not obscure it further behind popular opinion.

Such offhand promotion of misinformation can happen anywhere, but I've always been especially peeved by the publication of letters to the editor that miscorrect a previously published assertion -- or letters that leave readers with no clue who was right. This offense seems to be less common than it once was, or maybe I'm just mellowing with age.

*Doyle's post links to several, if you haven't seen them yet.
Posted by Jan at 2:11 PM 2 comments:

I'm listening to "Radio Boston," a local show on public radio, do a segment about Frederick Law Olmsted, who designed the string of parks and waterways we call the Emerald Necklace. Nice, until the three chatters began to chuckle about Olmsted's original name for the project: the Jeweled Girdle. "Racy," one of them called it.

Not really. For the first 900 years of its recorded history, girdle meant simply "A belt worn round the waist to secure or confine the garments; also employed as a means of carrying light articles, esp. a weapon or purse," says the OED. The tie around Brother Cadfael's robe, the belt on which the household keys are carried, a decorative sash -- all have been called girdles.

But the OED's first citation for girdle meaning a kind of elasticized corset worn below the waist  dates only to 1925. Since the Emerald Necklace project began in 1878, and Olmsted died in 1903, it seems very unlikely that he was acquainted with the girdle as an uncomfortable specimen of what we now call "shapewear." As for "racy," well, I'm guessing the guy who offered that opinion was thinking of a garter belt, an obsolete item (practically speaking) but one still considered sexy in some circles.
Posted by Jan at 8:22 PM 3 comments:

When this tease popped up on a boston.com website, I thought, uh-oh, the headline writer goofed: 25 Manners Kids Should Know, it read.


But the usage was intentional, it turned out. The story -- at Parents.com -- did indeed treat manners as a countable plural: "If you reinforce these 25 must-do manners, you'll raise a polite, kind, well-liked child." And yes, the 25 were enumerated singular by singular: "Manner #17: If you bump into somebody, immediately say 'Excuse me.'" "Manner #25: Don't reach for things at the table; ask to have them passed."

According to the OED, manners in this sense -- "A person's social behaviour or habits, judged according to the degree of politeness or the degree of conformity to accepted standards" -- was once also used as a singular. But even then, it seems to have been a mass noun, not a countable: "Thoughe thou do me good, it is not good maner to abrayde me therof" (1530).

I like to think I'm adaptable, languagewise; I'm fine with to parent and to nap (transitive: to put a baby down for a nap) and to verse (to play versus: "We're versing the Tigers").  But referring to picking one's nose or slurping one's soup as "a bad manner" -- that reminds me of the faraway pen pal who once wrote me, "I have a new for you." It may take me a while to get used to "he has five bad manners."