I was leafing through the November issue of WSJ. Magazine, wondering at the whimsies of the 1 percent, when I came upon some of the oddest semicolon usage I’ve ever seen. In a one-page feature called Still Life,* a photo of several possessions (detail below) is annotated by the objects’ proud owner -- in this case, Paul G. Allen, cofounder of Microsoft. A chunk of the text:

In 1999, I acquired Les Poseuses by Georges Seurat. I feel lucky to own a museum-quality masterpiece; I discovered Tomorrow, the Stars by Robert A. Heinlein in the basement as a boy -- it used to belong to my father. It's one of the many books that fueled my curiosity about the future of technology; a DEC tape containing the program files created by me and Bill Gates in Boston in 1975 while writing the BASIC code for the MITS Altair 8800. It was sent to Albuquerque, where we founded Microsoft; this Etruscan head was the first antiquity I've ever bought. People often don't realize that many early sculptures, like this one, were painted. The 2,500-year-old piece depicts a man with red hair; my biggest musical inspiration, Jimi Hendrix, used this Fender Stratocaster to play his iconic rendition of The Star Spangled Banner at Woodstock. ...

Yes, the clauses on the same topic are separated with periods, while the unrelated clauses are connected by semicolons -- the opposite of the usual practice. Maybe you don't find this disconcerting, but as one brought up on the standard semicolon -- the one that joins related clauses -- I was reeling. Once I caught on, I could see the potential: There's a certain weird poetry to "The 2,500-year-old piece depicts a man with red hair; my biggest musical inspiration, Jimi Hendrix, used this Fender Stratocaster." But is weird poetry what you use semicolons for?


Since the WSJ is generally a well-edited paper, I’m guessing this is Paul Allen’s own tic. And I can see his editor thinking, what the hell, it’s only 200 words, why annoy him? (I sometimes wish I’d said that to myself, as an editor, more often.) But those semicolons make it 200 words of extremely odd prose.

*It's STILL LIFE on the web version, but in print it's STILL/LIFE; I don't know how you'd parse that, but I'm sure someone thought it looked classy.
Posted by Jan at 5:38 PM 14 comments:

Muphry's Law across the pond

Earlier this month, the Financial Times ran a letter complaining about a couple of "grammatical" offenses, and once again the rule known as Muphry's/McKean's/Hartman's Law, or the Iron Law of Nitpicking, was in force: Any criticism of another's spelling or usage will itself contain at least one error.

This criticism came from faithful FT reader Brian Langdon-Pratt, who was in a state:


I'm shocked! Yes, really shocked! Reading the Financial Times last Friday -- as I’ve done for the past 40 years -- I came across two howlers. In the summary review by Nigel Andrews of The Perks of Being a Wallflower, he writes: “The hero Charlie wants to be ... even medalled as a social soldier”, and then later he compounds the grammatical offence by writing: "... half-brother Patrick is crash-coursed in literature". At least he put in a hyphen!

I know that standards of English grammar have slipped, but from Mr Andrews’ photo insert he looks old enough to know -- and hopefully to have been taught -- better.

The verb to medal has been around in the current sense since the 1960s, and Americans have complained about it for decades already. But as Graham at Linguism recently pointed out, medal is somewhat less familiar to the Brits, so if they want to smack it around a bit before they (inevitably) accept it, that's OK. The nonce coinage "crash-coursed," on the other hand, needs no defense -- the author isn't trying to impose it on the English-speaking world, he's just having a bit of fun.

But what about that "hopefully"? Does Langdon-Pratt not know that sentence-adverbial hopefully is (in Bryan Garner's terminology) a "skunked term" for true peevologists? I thought that perhaps hopefully aversion -- like our American which-that fetishism -- might have simply bypassed Britain. But according to Merriam-Webster's Dictionary of English Usage, "the ranks of hopefully haters grew steadily" in America from the mid-'60s to 1975, the year that "the issue seems to have crossed the Atlantic." British objectors, says MWDEU, "would repeat all the things American viewers with alarm had said, and add the charge of  'Americanism' to them."

You'd think a 40-year FT reader and language watcher would have encountered his culture's hopefully hostility at an impressionable age. But none of us can observe every language peeve, however attentive we may be -- hence the ubiquity, and inexorability, of Muphry's (etc.) Law.
Posted by Jan at 6:36 PM 10 comments:

A canoedling detour, an eggcorn update 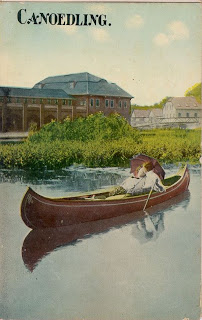 I've been neglecting this blog, it's true, but I haven't been utterly idle. I wrote a piece on the word canoodle for Cognoscenti, the new ideas-and-opinions blog at the website of my favorite public radio station, WBUR. And because canoodling has been linked (speculatively) with canoes, the (brief) history of boating romance is part of the background. It's a delightful story even without the language angle: Check out the essay "Love Boats" for more on "canoedling."

In other business: If your memory is good, you may recall that we debated, back in September, whether "wager the pros and cons" (instead of "weigh") qualified as an eggcorn. Arnold Zwicky, eggcorn eggspert, has replied to my request for a judgment on the matter:


Not an easy one. But you do make a semantic case for the eggcorn. [I.e., I argued that a speaker might think of "wagering" as betting on the likelihood of alternative outcomes.]

My guess is that this is a mixed case, with some occurrences being ordinary (classical) malaprops and some being eggcorns. (The phonology is a bit distant in either case.)

It does seem unlikely that it's going to catch on.

So I guess Eugenia Last, the astrologer who's responsible for most examples of "wager the pros and cons," will get the last (sorry) word; if she means "wager" in some plausible way, she's got herself an eggcorn.

Illustration: A couple on the Charles River in Newton, Mass. (Vintage postcard courtesy of Benson Gray.)
Posted by Jan at 11:33 PM 3 comments: