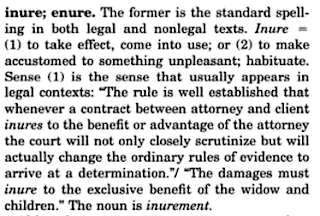 No harm would come of abandoning enure; it wasn't the novel spelling that confused me about legal inure (I was listening, not reading), but the unfamiliar sense. Once I've learned that, context supplies the necessary clues. Similarly, I like using insure for both senses of the word, and though the tradition is fairly well settled now, it's hard to see that the mantle/mantel distinction contributes at all to clarity. But it's never easy for us natural-born sticklers to surrender our hard-learned editorial minutiae.
Posted by Jan at 10:48 AM 3 comments: