Even after a week of hearing Netanyahu’s claim that Israel’s 1967 borders are “indefensible,” I’m not quite used to hearing the word in its literal meaning – “Incapable of being defended by force of arms” (OED).
I've surely encountered the literal use before, but the figurative sense of indefensible looms much, much larger in my lexicon. And because the figurative use is so pejorative – not just “incapable of being defended in argument” but “unjustifiable, inexcusable” – I have to make a tiny but conscious adjustment to hear the word as Netanyahu intended it.
Of course, given our different geopolitical situations, it could well be that the literal definition of indefensible is as dominant in Netanyahu's world as the figurative sense is in mine.

I have no idea whether the Hebrew word has the same figurative use as the English one; can somebody enlighten me?
Posted by Jan at 8:58 PM 9 comments:


The minimum fine is $350, higher if one of those hapless "DON’T HONK" signs are nearby.

Fine -- but I have a different problem here: Can a sign be "hapless"? That is, "destitute of 'hap' or good fortune; unfortunate, unlucky, luckless" (OED)? Surely it's the driver who's unlucky; it would also be OK to say "if, unluckily, one of those DON'T HONK signs is nearby."

I don't mean that "hapless" can never be applied to things; "work performed on the hapless London Plane trees" is fine, since the trees are indeed having an unlucky streak. But (in my idiom, anyway) the New York sign isn't itself hapless just because its location is unlucky for some cabdriver.
Posted by Jan at 10:44 AM 10 comments:

My column in yesterday's Globe was about the AP Stylebook's new food section; reading it took me back to my days editing the food section, back when it had three zones' worth of advertising. (That was then ...) Food, I see, remains a maddening area for copy editors. For instance, AP has Monterey Jack but lowercase pepper jack -- same cheese, same Jack, whoever he was, but one is capped and one is not.

The "French" list was odd, too: French bread, French toast, French dressing, but french fries, lowercase -- "because it refers to the style of cut, not the nation." Really? I know of French cut  (or frenched) green beans, those lengthwise slivers, but I've never heard of french cut (or frenched) potatoes, up or down. (And where does the style of cut come from, if not "the nation"?)

Also, perhaps because I've never used AP style on the job, I was surprised when definitions didn't accurately reflect the entry word's part of speech: alfresco is called "a meal eaten outdoors," for instance, and dredge (a verb!) is  "a cooking technique in which food is lightly coated with flour." Has this always been AP stylebook style?

Finally, yet more evidence that a stylebook (or dictionary) can't do it all. The photo above ran with my column, with the competing fil(l)et spellings differentiated in one common way (though not the way AP now does it). That "fillet" o' fish fits the official definition -- "a boneless cut" -- just fine, as far as it goes. But at the fishmonger's and on the menu, that piece of fish is not a fillet; the cross-section serving is commonly known as a steak.
Posted by Jan at 6:35 PM 7 comments:

From the preview for the (subscription only) May issue of The Vocabula Review, emphasis added:


Perhaps nothing in the fetid grammatical atmosphere we are all breathing is more disturbing than the frequent presence of so-called singular they. This should be seen as plain error but is tolerated by some … ("Another Plea for Avoidance of 'Singular They,'" by Robert Hollander)

The English journalist Malcolm Muggeridge -- a first-rate, if underappreciated writer -- believed success could be had only in second-rate pursuits -- like becoming a millionaire or a prime minister. First-rate pursuits involved "trying to understand what life is about" and therefore must inevitably result in a sense of failure. Thus could a Napoleon or a Roosevelt feel themselves successful, but a Socrates, never. (“Too Wretched for Words,” by Christopher Orlet)

"No word for adultery"

In the current (May 16) New Yorker, a review of Sarah Vowell's "Unfamiliar Fishes" describes early missionaries to Hawaii as


... wan New Englanders confronted with a people whose language lacked a word for adultery. (Their approximation: "Mischievous mating.")

The "no word for adultery" is Vowell's conceit, apparently, and I haven't tried to check its accuracy. But what immediately struck me is that "mischievous mating" is about a million times more descriptive than "adultery." How did a word like that come to mean "illicit sex with a married person?"

Yeah, I know you've probably moved on from royal-wedding-land, but I didn't watch it, so I'm catching up slowly, via print. Anyway, I was checking the text of the vows the other day when I ran across this very odd report:


Prince William then slipped the ring on the bride's index finger.*

Not very traditional, and also not true, judging by this AP photo: 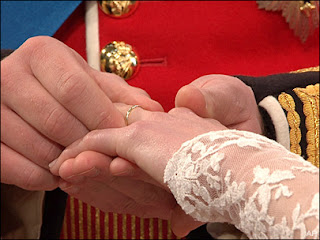 I don't know anything about the source, International Business Times, except what I see on the website, but it doesn't seem to have any obvious problems with standard English. But I don't think I've ever seen "index finger" substituted for "ring finger" before. Anyone else?