Getting over the "more than" peeve

How to debunk a peeve so it stays debunked? You might have thought the more sophisticated publications had long since gotten the word that there's nothing wrong with writing "over 500 votes," despite a journalistic superstition that only "more than 500" is correct.

But last Sunday's Times Magazine would have proved you wrong. A sentence in the cover story was clunky evidence that the myth persists. "Today," it read, "there are well more than 2500 juveniles serving time in adult prisons in the United States."

Is "well more than" really a phrase that leaps to your lips (or fingertips)? "It's well more than a year since I flew anywhere." "He's well more than 50." "There was well more than $1,000 in the bag." I don't think so: "Well over" is what we say in English. And over meaning more than was uncontroversial till the mid-19th century, when the language busybodies were at their busiest inventing new infractions.
The earliest known objection to this over, as I've mentioned before, comes in Walton Burgess's 1856 compilation of "Five Hundred Mistakes" in English. But his "rule" was not adopted (or followed) by most usage writers. And the Times has called it bogus since at least 1971, when the paper's language maven Theodore Bernstein included it in "Miss Thistlebottom's Hobgoblins," his handbook of wrongheaded rules.
More recently, Philip Corbett cautioned Times editors in his After Deadline blog:


In most cases, changing “over” to “more than” might be harmless enough — a copy editor’s quirk, annoying to the writer but invisible to the reader, since “more than” is also perfectly acceptable. But I’m occasionally jarred to see the phrase “just more than,” which strikes me as awkward and completely unidiomatic.

Until this week, I would have read "to sunscreen" as meaning "to shield someone/something from the sun's rays." But in Wednesday's "Pajama Diaries," the verb is used in a different sense. "Strapping the kids down to sunscreen them" means not to put them under an umbrella, but to apply sunscreen cream to their skin.

Logical enough: We can already soap, oil, perfume, shampoo, and towel our bodies, so why would anyone object to sunscreening them? It's just one more bit of shorthand from the time-crunched parenting subculture. To diaper is old hat, of course, and to parent, says the OED, has been around for 350 years. (It's the intransitive use, only 50 or so, that still raises a few hackles.)

My favorite parenting verbs, though, are the new transitive forms: "We can stroller the kids to the Joneses' and nap them there." Or "We generally pee her at 11" -- that is, carry a sleepy, not-yet-trained toddler to the toilet.  (Toilet itself, meaning to assist someone, old or young, at the toilet,  has been a verb since the '50s. But it sounds somewhat clinical, and besides, who needs the extra syllable?)

I haven't yet heard of babies being Bjorned, bottled, cribbed, or toothbrushed, but I'll bet those verbs are just a mommy blog away.
Posted by Jan at 4:22 PM 12 comments:

Before the grace of God

In today's Times -- on the website, and still in print as of 12:30 -- guest columnist Ta-Nehisi Coates writes, "'There before the grace of hard parents go I' was the lesson of my life."


The usual formula is "There but for the grace of God go I," but Coates's "before the grace" is a not uncommon variant on the Web. And though I couldn't find it in the Eggcorn Database, it's easy enough to see the alternative reading, with "before" meaning "without, until the bestowal of." (Not a reading that bears too much scrutiny, but then, we don't tend to scrutinize these phrases.)

It's not the first time I've been taken aback by a variation on this saying. Two years ago, I blogged about a truncated form that also appeared in the Times (among other places, including a Keith Urban song): "But for the grace of God go I" all by itself, with no there there. Just further evidence that we don't need all the words -- or even notice all the words -- once a fixed expression is sufficiently familiar.

Back in May, when we were all marveling at The New Yorker’s cluelessness about “prescriptivism,” a commenter at Language Log argued that prescriptivism is not a counterpart of descriptivism but a matter of manners. It’s “a branch of etiquette columnry -- prescriptivists advise us of what the more embarrassing solecisms are.”

Now John McWhorter, writing at the NYT’s Opinionator blog, makes a similar point, this time calling the usage rules a matter of fashion.

The well-spoken person, [William] Cobbett instructed [in 1818], swimmed yesterday and builded a house last year ... Builded only started falling out of disuse* around 1920. Not for any reason; no one discovered that builded was somehow elementally deficient. Fashion changed.

Call it fashion or etiquette -- there’s plenty of overlap -- but the fact that usage customs change over time is easy for anyone to see, with the works of the great peevologists all online at Google Books. So even if “etiquette columnry” was meant to sound dismissive, we don't have to take it that way. As I said in a comment at John McIntyre’s blog, teaching "the rules" as mutable, adaptable customs is a useful strategy:

It takes them down from the Eternal Verities pedestal and puts them in the realm of everyday choice; we remove our shoes at home, our friends don't. Bridesmaids must never wear black; until they do, and look tres chic (to everyone but their swooning mothers). Geoff Pullum argued persuasively (at Language Log) that dangling modifiers were not mortal sins, but existed on an etiquette continuum, from offensively baffling to barely noticeable.

If we keep reminding everyone that "good English" varies according to the circumstances, and that any usage is subject to change (yes, over our dead bodies), maybe we'll eventually reduce the amount of self-righteous dudgeon and ritual complaint about language decline.

And we might even improve our prose. In a follow-up post on editing and etiquette, McIntyre shows how useful the analogy can be. A perfectly grammatical published sentence, he notes, can amount to “a breach of manners, because etiquette requires consideration of the other party, and this sentence shows no such consideration to the reader.”  That’s a criterion that will always be relevant, however fashions in usage may change.

*Update: Commenter Vance Maverick points out that McWhorter means "falling out of use," not disuse.
Posted by Jan at 10:52 PM 3 comments:

Will you rate your transaction at Amazon.com?

No. No, Amazon, I will not. I would like to give your sellers full credit -- and generally, the shipping/billing process goes exactly as it ought to -- but you are asking too much.

In your e-mail requesting feedback, you tell me I can click on five stars, meaning "Excellent -- Item delivered on time, was as described, great customer service (if contacted)" and so on. Or I can click on "My experience was different" and enumerate my complaints. But you won't let me just click on "excellent" and leave it at that. No, you demand that I enter a comment, or at least a couple of typed characters, into a text box. I can't just bestow an A+ -- no, I have to add some inane attempt at amplification.

I thought you had seen the error of your ways, Amazon. Last fall, I reported that you had abandoned this silly practice, but apparently I was wrong. I don't get it: How can it be good for sellers if you annoy the most satisfied buyers by telling them they can only award five stars if they consent to waste their time adding superfluous  compliments?

For a smart organization, this is a very stupid policy. Customers should be able to give good sellers the best rating -- "Excellent -- five stars" -- without being forced to put a cherry on top.
Posted by Jan at 11:21 PM 9 comments:

When I started this post, weeks ago, I thought I knew where it was going. I wanted to point out a couple of English constructions that sound weird -- close to unacceptable -- to me, and (with luck) to find out what they're called and why they don't work. But it turns out there may be no there there -- just my idiolect insisting (as an idiolect will) that its way is the right and reasonable one. 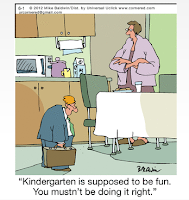 The first example comes in the caption of the comic "Cornered," where the mom is saying to the kid(?): "Kindergarten is supposed to be fun. You mustn't be doing it right." I would have said* "You must not be doing it right"; I hear "you mustn't" as meaning "you are forbidden to," not "you probably are." (I wondered if the "mustn't" form might be OK in British English, but I thought Americans would be on my side here.)

The tagline in a Slim-Fast ad bugged me in a slightly different way. "Your swimsuit is ready. You'll be too" trips me up; I'd prefer either "You'll be ready too" or "You will be too."

I hoped these contractions would prove to be forbidden forms of auxiliary reduction, but just coming up with that term stretched my expertise to its limits. So I asked Arnold Zwicky, who knows all the linguistic labels and is a wizard at coining new ones when they're called for. And he poured cold water all over my quest.

Are these contractions off limits, or even suboptimal? He didn't think so. "For me, the Cornered example is perfectly fine," he wrote.


"Mustn't" (like "must not") is in principle capable of either a root interpretation -- subject is obliged not to V -- or an epistemic interpretation -- it must not / mustn't be the case that subject Vs. Compare: You mustn't touch the hot stove (or you'll get burned). You mustn't like ice cream (if you make a face like that).

As for my theory that the "epistemic mustn't" is a British thing, well, that's just an example of the "foreigners are weird" default assumption. Americans, Brits, and Australians all use it, said Zwicky. It's true that "some speakers judge such examples to be unacceptable, but what they say about them is all over the map. In particular, some find the examples to be unacceptably American, some find them to be way formal and British-sounding."
The swimsuit issue was also not a question of auxiliary reduction, he thought.

That's as far as I can go without professional help. And if you want to avoid this whole mess, I understand. But if you've been patient enough to read this far, please let me know how these constructions strike your ear -- intolerable, unremarkable, or somewhere in between?

*At least I think I would -- we're all unreliable witnesses to our own linguistic behavior.
Posted by Jan at 11:56 PM 27 comments: