Observations on "one of the only"

James Harbeck, blogging at Sesquiotica, has been having an epic comment standoff with a reader who objects to "one of the only." Last Sunday, Harbeck tweeted that the commenter had returned and "made the same argument, more huffily, and ended by declaring that my readers could judge ... so do."

OK, let's! My vote probably won't persuade anyone who's resisted the arguments of Harbeck and Gabe Doyle at Motivated Grammar and Bill Walsh at Blogslot  and Merriam-Webster's Dictionary of English Usage. But I endorsed "one of the only" in a 2008 column, and I offer it here in case any of its citations prove useful. (I've added a footnote, but otherwise nothing has been changed or checked. As I recall, a reader objected that "un des seuls" was not a true equivalent of "one of the only," so I look forward to hearing from Francophone readers on that question.)

AS THE DISTRICT of Columbia's gun ban squared off against the Second Amendment last week, Georgetown University constitutional scholar Randy Barnett was widely quoted on the momentousness of the event: "This may be one of the only cases in our lifetime when the Supreme Court is going to be interpreting . . . an important provision of the Constitution unencumbered by precedent."

Objection! e-mailed reader Sue Bass of Belmont. "One of the only cases" doesn't make sense, she protested; it should logically be "one of the few."

Several contemporary usage writers endorse her view. Paul Brians, in "Common Errors in English Usage," notes that only is rooted in one, and thus ought to remain singular. "The correct expression is 'one of the few,' " he says.

Barbara Wallraff, in "Your Own Words," agrees. Only means "alone in kind or class; sole," her dictionary says. And you wouldn't say "one of the sole Muslim states."

Richard Lederer, in "Sleeping Dogs Don't Lay," also shuns one of the only: "This strange and illogical expression began showing up a few years ago," he writes, "and English took a step backward when it did."

But one of the only has its defenders. James Kilpatrick, in "Fine Print," points out that it is no less logical than one of the best or one of the most talented. "The best advice I can offer is to shake your head and get on with what you are writing," he concludes.

Earlier usage gurus are silent on the topic, though there's some indirect evidence of their attitude. For instance, the critic Edmund Wilson, reviewing a 1940s potboiler, observed that "one of the only attempts at a literary heightening of effect is the substitution for the simple 'said' of other, more pretentious verbs" like "shrilled" and "barked."

Usage maven Sir Ernest Gowers liked this quote enough -- despite its use of "one of the only" -- that he included it in his 1965 edition of Fowler's "Modern English Usage," as a comment on "said."

How long has this been going on? A Google Books search dates one of the only to the 1770s, when a traveler reported that "business, and making money, is one of the only employments" of Rotterdam. But only was already losing its singularity. The 1989 Oxford English Dictionary gave the sense "one (or, by extension, two or more), of which there exist no more . . . of the kind," and quoted Sir Philip Sidney, in the 16th century, using "the only two."*

This expansive sense of "only" is not just an Anglo-Saxon aberration. In "Swann's Way," Proust's narrator says that a certain day was "one of the only" ("un des seuls") on which he was not unhappy. In German, according to University of Wisconsin professor Joseph Salmons, one of the only (ein der einzigen, etc.) is entirely OK.

Multilinguist Steve Dodson, at the blog Language Hat, said one of the only is common in Russian and in Spanish (un de los unicos). Geoffrey Nunberg, a linguist at UC Berkeley, sent some examples in Italian (along with a caution from an Italian linguist who calls the usage illogical).

Once we had the only two, in other words, we were on the slippery slope to one of the only. And in everyday, unedited English, we prefer it to one of the few by a Google hit ratio of 3 to 1. Nobody has to use it, but everyone speaking English can expect to hear it. After two and a half centuries, we should be getting used to it. 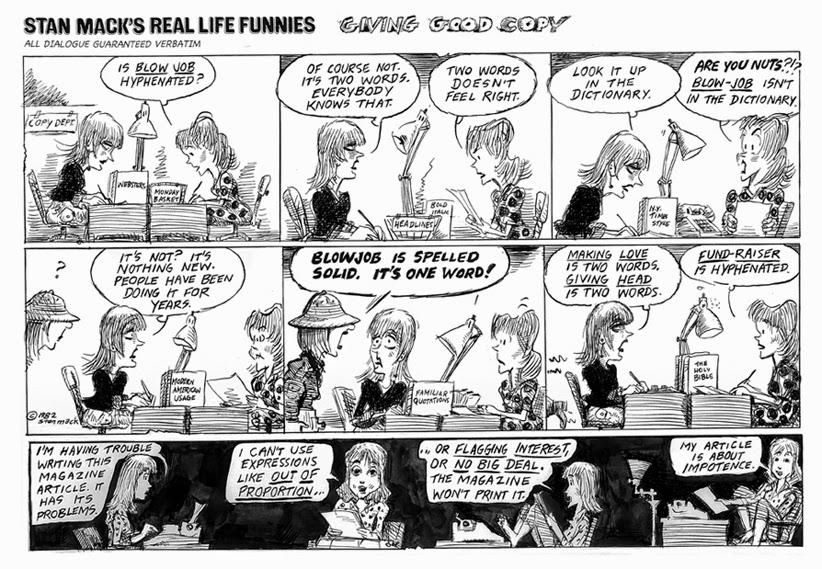 If you missed Real Life Funnies the first time around, you can see (and buy) some at Mack's website; his current cartoons appear weekly in MediaPost.
Posted by Jan at 6:36 PM 4 comments: