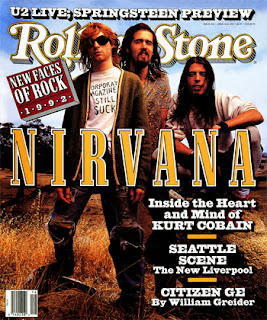 Everyone has seen at least one dirty-joke typo, if only the frequent misspelling of public as pubic ("in the pubic interest," "pubic relations," et al.). But I don't think I'd ever heard of a typo that accidentally cleaned up language meant to be rude. That is, until my daughter spotted one in the Wall Street Journal last week, when she picked up the print edition and started reading a report on the return of the grunge-style sweater. It began:

KURT COBAIN HADN'T been famous long before the world became aware of his penchant for fuzzy, defiantly unpolished sweaters of the thrift-shop variety. ... On the cover of Rolling Stone's "New Faces of Rock" issue, he wore his beloved green cardigan over a DIY T-shirt that brattily declared "corporate magazines still stuck."

"Wait a minute," said my daughter. "That has to be 'corporate magazines still suck,' right?" Right, of course, and the online version of the story now quotes Cobain correctly. (The bowdlerized version is still on view at a different WSJ site.)

I assume this is the author's mistake, both because the preceding "still" might prompt the erroneous "stuck," and because an editor wouldn't change "suck" to "stuck" without a query. But it's interesting that an editor would accept the misquoted version as an example of countercultural protest. Maybe, at the WSJ, "corporate magazines still stuck" qualifies as a bratty sentiment.
Posted by Jan at 11:57 AM

This very day, I saw a notarized letter where the notary's official New York State stamp actually did read "Notary Pubic". I wonder how many years the poor woman has been using that stamp.

The proofreader and/or the editor should have queried the typo long before the issue hit the stands.
Some day I will admit my worst-ever typo right out in public on my blog, but not yet.
K