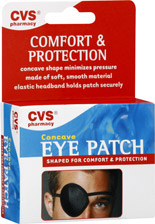 Hmm, I'm wondering what the point of the... point is. You'd think that they would just make it out of soft, semi-flexible, material that molds around the contours of your brow.

I would say that it's simply curved, as the two surfaces are parallel. If it were a solid cube, for instance, with one side curving inwards or outwards then I'd say that surface was concave or convex, respectively.

This argument relies on the assumption that the difference between the inside and the outside of the patch is ambiguous; I don't know if the thing is reversible, but this is the only way that that could be true.

"Minimizes pressure", it says. On what? On the eye. So it's the eye's-eye-view that counts. "Concave" it is.

I agree with John re the eye's eye view.
But an interesting discussion is being had by all, which is the best part of the whole thing, n'est-ce pas?
K

I would imagine the point of the point is that it will stiffen the patch, making it less likely to collapse onto the eye if you walk into something (with your lack of depth perception!).

I agree with John Cowan.

But I have to add that there is a history of ambiguity in the mathematical use of the word "convex", to the point where some calculus books try to cut through the ambiguity by distinguishing between "concave up" and "concave down". You might think that one of these should be called "convex" and the other "concave", and you'd be sort of right but sort of wrong ...

The usage of "convex" in math that I'm familiar is that every point between two points of a convex body is also within the body. In that sense, the eye patch would not be convex. I don't think non-convex things are called concave, though, because there is such a variety of ways that a body could fail to be convex -- think of a sphere covered by small pits.

I agree with you, Greg, as far as convex bodies go, but there is the related mathematical usage "convex functions".

It is standard practice to call a function convex if the set of points above its graph is convex, for example if its second derivative is positive. This is a useful bit of shorthand for those who do research in mathematical analysis. The convention could just as well be that a function is convex if the second derivative is negative. (Think of the points below the graph instead of the points above.) I think that writers of calculus textbooks for a time used "concave" for the latter notion. But now they've switched to calling the latter "concave down" and the former (the experts' "convex") "concave up", and leaving the word "convex" out of it entirely.

Seems simple enough. I don't know if we need to drag calculus into the discussion.

I don't want to be unduly argumentative. I just wanted to clarify to Greg my point about there being some ambiguity in the convex/concave antithesis.

But setting aside functions and getting back to three-dimensional objects, isn't there still some ambiguity? An object can be "rounded outward" on one side but not the other. You might say that the eyeball side of the eye patch is disqualified, because the dictionary definition says "outward", but dictionary dictionaries aren't everything. Whoever wrote that definition was not, presumably, thinking specifically of an object that has an "outer" side and an "inner" side".

I should note that I'm agreeing with John Cowan, here.

Me, too, although I do think the copy on the package is badly written.

Isn't there a limerick ending:
"concave or convex
it fits either sex
and is perfectly easy to clean."

Maybe it inspired your eyepatch people.

This ad for a "convex" eye patch touts it's unique "concave" shape. http://www.colonialmedical.com/convex-eye-patch-P-843.html