Over and over again

“I agree with your objections to the unhelpful comparisons using the stack of money and distance to the moon,” wrote T. Roger Thomas in a comment on my criticism of a New York Times op-ed. Then he went on:


I would also add an objection to the use of "over" in the original piece. To my way of thinking, one can climb over a fence. I would prefer to see the term "more than" used to denote a greater amount of things, which, in this instance, happen to be dollars.

He’s talking (I assume) about Ezekiel Emanuel’s “$2.6 trillion on health care, over $8,000 per American.” But this is a nit that I didn’t pick even when I was a professional nitpicker, despite the temptation to go along with my fellow journalists. "Disapproval of over ‘more than’ is a hoary American newspaper tradition,” says MWDEU, but the usage was standard for many centuries before some 19th-century crank decided he didn't like it.

We haven't identified that crank; as I said in an April 2010 post on "over" and "more than," the earliest mention of the  issue I’ve found is in an 1856 usage book by Walton Burgess, son of a New York City printer/publisher, grandly titled “Five Hundred Mistakes in Speaking, Pronouncing, and Writing the English Language, Corrected.” At No. 130 we get: "'There were not over twenty persons present:' say, more than. Such a use of this word is not frequent among writers of reputation."

William Cullen Bryant followed Burgess's lead in 1870, and Ambrose Bierce piled on in 1909. But even in its heyday, the “rule” was far from universal. Scott and Denney's "Elementary English Composition" (1900) said that “over a million dollars” was correct usage. And in 1856 -- the very same year that Walton Burgess declared war on this "over" -- a rival usage book, with an anonymous author, defied his ruling in the boast above its title: “Over 1000 Mistakes Corrected.” 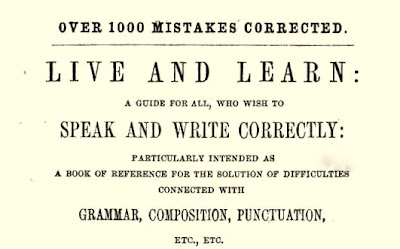 For more on “over/more than,” see John McIntyre (at his non-paywalled former blog) on the AP Stylebook as a "repository of extinct rules"; Mark Liberman at Language Log; and Paul Brians's Non-Errors Page: "This absurd distinction ignores the role metaphor plays in language. If I write 1 on the blackboard and 10 beside it, 10 is still the 'higher' number."

A few years back I encountered a related claim—that you can't raise or lower prices, because those words mean moving something up or down in space. You can only increase or decrease prices.

I think this is probably the single most ridiculous prescription I've ever heard, and it seems to stem from this ban on spatial metaphors.

I was previously unfamiliar with those two 19th century manuals. Both are available through Google Books, as well as in hard copy by print on demand. I will have to add them to my collection.

Comparing the two, the anonymous work is much better in that the first half is a reasonable (at least at first glance) guide to useful stuff like tips on punctuation. The second half is a list of random peeves. The Burgess is just peeves.

What I find interesting is that the lists of peeves are too similar to be coincidental. The first peeve in the Burgess is

"'The business would suit any one who enjoys bad health.' {From an advertisement in a daily newspaper of New-York.} Few persons who have had bad health can be said to enjoy it. Use some other form of expression: as, one in delicate health, or one whose health is bad."

The second peeve from the anonymous work:

"'The business would suit any one who enjoys bad health.' {from an advertisement in a New York newspaper:} say, any one in a delicate state of health, or, whose health is but indifferent."

Many others are equally similar. My first thought was that the Burgess might actually be an abridgment, but the entries are different enough that I doubt this. It looks to me like they are both paraphrases of the same earlier unacknowledged source. I wonder if this would have been considered plagiarism at that time?

Many of the items are with regard to how to conjugate various verbs, standardized pronunciation, and the like. Most of these are unremarkable today, which suggests that they actually reflect dominant usage of the day. A few are more surprising, such as favoring "lighted" for "lit", considering the latter to be obsolete. And working up a thousand peeves is a lot of work. There is at least one duplicate, mysteriously rejecting "If I am not mistaken" in favor of "If I mistake not."

I understand the distinction Mr. Thomas is trying to make between "over" and "more than." But what really caught my eye was "a greater amount of things" which we all know should be a greater or larger "number" of things. To the best of my knowledge, "number" and "amount" are different, and (in my opinion) should be used differently.

Over is not quite as simple as the peevers may suggest. As usual, they haven't been paying attention, but rather peeving ex cathedra. There's an enormous literature on the meanings and uses of over in cognitive linguistics.

This recent abstract provides a bibliography, starting with Claudia Brugman's classic 1981 dissertation The Story of "Over".

There appear to be six basic senses, depending on such factors as whether the trajector is in contact with the landmark or not (as in the plane flew over the mountain vs. he climbed over the mountain).

This has all been known and rehashed frequently for over 30 years. Not that anybody was paying attention, of course.

Walton Burgess is quoted as writing:

"'There were not over twenty persons present:' say, more than. Such a use of this word is not frequent among writers of reputation."

and then this is discussed as though it meant "don't use 'over' to mean 'more than'." I think this is jumping to a conclusion, since I happen to agree with the first, but not the latter.

Your link at "John McIntyre (at his non-paywalled former blog)" is broken. Thanks.