The etymology of "toilet" is a good story, so I was pleased (at first) to see it mentioned in this full-page Clorox ad. "The word 'toilet' comes from the French word 'toile' which originally referred to a woman's dressing table," the small print begins. But when I squinted, I saw 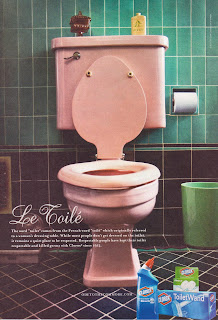 that what it really said was "from the French word 'toilé.'"
Uh-oh! that charming continental rogue, the accent aigu, has seduced another victim. Toilet does come from toile, in French a kind of fabric (and in English too, where it usually refers to toile de Jouy, with its monochrome print of landscapes or shepherds). But it was the diminutive form, toilette, that English adopted, starting in the 16th century, to mean a variety of things connected with primping. Toilet (toylett, twilet) could mean "A cloth cover for a dressing-table (formerly often of rich material and workmanship); now usually called a toilet-cover," says the OED. A lady's toilet might also be the assemblage of powders and pomades and implements used at the dressing table, or the process of applying them, or even the table itself. Next toilet expanded to mean "dressing room," then to that room with any lavatory fixtures included, and finally to the porcelain throne.

But toilé doesn't come into the story, as far as I know. Yes, it's a word -- a French adjective, and an English noun for a kind of lacework -- but until Clorox adopted it as an adorable description of its pink toilet, it had nothing to do with plumbing.

I don't mean to get too heavy here; it's an ad, and "Le Toilé" is intended to be silly (the ad refers readers to the website odetothecommode.com, where there are probably no actual odes). But if I'd been a copywriter on the pink toilet ad, I think I would have argued for La Toilette instead of Le Toilé. Why invent language facts when the truth would serve just as well?
Posted by Jan at 7:08 PM

Many readers of the ad will mentally pronounce the cute phrase like this: "Lay twa-lay".

Like Pepe (or is it Pepé?) Le Pew, they know that the final -ay sound is the true mark of Frenchiness, and have no clue that the French definite article that sounds like "lay" is strictly plural, or that is spelled with an "s".

"Toilette" sounds diminutive rather than Frenchy, and that's not the goal.

I don't think it was an invention. I think the copywriter was probably just wrong, and nobody checked it.
But I love your heading!
— K

Perhaps their use of 'Le Toilé' was a play on words related to the work (or toil) of cleaning the toilet, as they sell cleaning products.

At least that was my first impression upon seeing the ad.

Nope, no odes at OdeToTheCommode.com, but there is a section called Potty Central, which made me giggle.

I was talking once to an usher at a Viennese theater, who for some reason was gushing about his enjoyment for his job. He announced (translated), that what he liked above all were the toilets. It took me a second to realize that he was talking about the elegant dresses the women wore. (German also uses "Toilette" to mean both the wardrobe and the plumbing, though in that situation he'd have probably said "WC" if he'd meant the latter.)

A mail-order clothing catalogue I use regularly offers blouses featuring "broderie anglaise" with an accute accent on the final "e", presumably because they think it makes the word look more French.