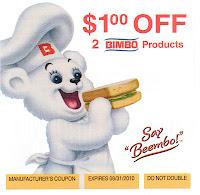 The sticky-note coupon on the front of this morning's Boston Globe got my attention: "$1.00 Off 2 Bimbo Products," it promised. It sounds like something Hugh Hefner might be hawking, but instead of a bunny, the artwork showed a fluffy white bear, chef-hatted and cheerful, about to attack a sandwich. And below was the pronunciation key: "Say 'Beembo!'"

Say what? Well, the answer was easy enough to find. Bimbo Bakeries, a company founded in Mexico, is not only expanding in the US market but owns many old familiar brands, including Entenmann's, Thomas's, and Oroweat. According to Wikipedia, "Bimbo Bakeries USA is the American corporate arm of Mexico's Grupo Bimbo. It is the largest bakery company in the United States, owning six of the top twelve fresh bread brands in the United States."

And about the name: "The official version has it that the name Bimbo, coined in 1945 ... was chosen because the company thought it competed well with the existing Bambi and Dumbo brands in Mexico. In addition, the innocent, childlike name went well with the brand image they wanted to build."

So, "say Beembo" … will that tagline help us all suppress the snicker reflex? Well, apparently our friends in the Southwest and West have been getting acquainted with Bimbo for a while now. Yeah, I know, the first time you hear it, you can't believe it will survive; the cupcake-honey bun jokes write themselves. But if you think you'll be smirking forever, I have two words for you, both hilarious not so long ago. One is Wii; the other is iPad.
Posted by Jan at 7:07 PM

Ah, but Wii and iPad are *still* hilarious.

They have their work cut out for them, trying to make room for the word despite its cultural baggage. The pronunciation guide just makes me think of "bimbo" (in the conventional sense) being said with a greasy leer. Like "Hey, greeeengo!"

Nice playful suffixation on the website, though: they describe their Thomas' Bagel Thins as "110 calories of bagel-y goodness".

While in Costa Rica several years ago I tried very hard to get a photo of my ex-GF with a Bimbo truck in the background.

I look forward to their U.S. expansion!

In the Misleading Case Trott v. Tulip (by A.P. Herbert) which turned on whether it was libelous to call someone a highbrow. The judge noted inter alia:

"[O]ne man might say to another, 'You are a Bimbo' or 'You look like a Togg' without offence; for these expressions, though presumably hostile in intention, have no known significance, discourteous or otherwise."

I don't have an exact date for the writing of this, but it was published in 1930, suggesting that the term "bimbo" was still fairly unusual in the U.K.

When I was a young child in the 1950s my grandmother had a cat called Bimbo (presumably from the "bambino" sense).