The writer didn't blue it after all

A British veteran of colonial Burma and WWII wrote of another former "forest man," his colleague in the teak harvesting trade:


Nor can I ever explain what possessed him to blue all his savings he had accumulated towards the enjoyment of one leave, on the invention and patenting of a form of head protection which should supersede the solar topee in the dry season and the umbrella during the monsoons.

The author is J.H. “Elephant Bill” Williams, and my friend Vicki Croke, who’s working on a book about Williams, sent me the puzzling quote. How, we wondered, could a native speaker of English come up with the blue in that sentence? And how could the editor of the 1953 book in which it appears have missed it?

If Williams had used the past tense, writing “he blue his savings” would look like just a slip, an accidental substitution of blue for blew. But neither spelling makes sense in the infinitive form: “to blue all his savings” and “to blew all his savings” are equally unacceptable.

Our speculation, it turned out, was a waste of time and brainpower; the answer was at my fingertips, in Jonathon Green’s imposing new Green's Dictionary of Slang.* This blue, says Green, is just a variant of the slang blow, “to squander, to waste.” His earliest example is from the periodical Wild Boys of London (1866): “Sich an hawful lot of coin I’ve blued, too.” (Blue, unlike blow, is conjugated as a regular verb: I blue it, I blued it, I have blued it.)

The OED lists the slang blue too, with citations from 1846 to as recently as 1959, when the Observer used it in what sounds like another description of British colonial life: “Men in cotton shirts and corduroys met there to ‘blue’ their cheques on supplies and on fiery colonial rum.” Google Books also has several examples; the latest I could find came from Anthony Burgess's 1963 novel, "Inside Mr. Enderby":

'An' I blued it all on booze in town. I think I'd better come up there,' he added, bold. 'I could sleep on the couch or something.'

Maybe this blue was chiefly British usage, and maybe, despite its century-long career, it was never truly widespread. But if Burgess could use it in 1963, there's no reason to think Williams's editor, 10 years earlier, would have balked at it -- however odd "he blued it" looks today.
*FTC disclosure: Oxford University Press sent me a review copy of Green's Dictionary of Slang.
Posted by Jan at 1:20 PM 14 comments:

NPR on the garden path

Just heard this momentarily misleading report on "All Things Considered":


A Pennsylvania hospital says it was spreading lung cancer …

Wait, spreading it how? It’s not contagious, is it? Well, no:


… it was spreading lung cancer that killed Joe Paterno.

Amazing how far your mind can race down the wrong fork of a garden-path sentence before the truth catches up with it.
Posted by Jan at 5:45 PM 5 comments:

Too much of a good thing?

Earlier today, Robert Lane Greene at Johnson checked in from the road to ask readers what topics The Economist’s language blog should focus on. The replies so far are unusually varied (not just the same old peeves) and sometimes strange, but the strangest of all, I thought, came from Great Uncle Clive. His recommendation:

Allow your bloggers* ... Us ... to respond to each other and develop ideas, before you change the topic

A commenter who wants you to post less frequently: With fans like that, who needs critics? RLG is a pro, so I’m sure his response to Uncle Clive won’t be “If you want to develop your own %$@! ideas, write your own %$#@! blog!” But I wouldn’t be surprised if he was thinking it.
*I'm assuming (perhaps too charitably) that Uncle Clive's "blogger" for "commenter" here was a slip.
Posted by Jan at 11:05 PM 7 comments:

Though Ron Paul finished well behind Romney in the New Hampshire primary, he was upbeat: "We're nibbling at his heels," he said.

I had never heard this variant on "nipping at one's heels," but it seemed so natural and plausible, I thought for sure it would be in the Eggcorn Database. But no; it's not there, and though the nibbling version gets a handful of Google hits, it doesn't come close to rivaling the standard nipping idiom.

That suits my sense of the words; I think of nipping (at someone's heels) as aggressive behavior, like herding sheep or chasing prey. Nibbling, on the other hand, means eating in tiny increments, or at least pretending to eat, and isn't a hostile act. The OED definition: "To take a small bite, or a series of small bites, at or from (a thing); to bite away gradually; to bite tentatively, delicately, playfully, or amorously."

There has been, historically, some overlap in the verbs' senses -- but not in the direction of the Ron Paul substitution. It's nip, which implies a a pinching action, that has sometimes been used as a synonym for nibble, according the the OED:

That durn brute was shakin' his ears and nippin' grass unconcerned as a can o' green corn. (1900)

Apparently, though, there have been moments when a writer felt the need of both verbs at once. And because one of those writers was George Meredith,* the OED has also recorded the "rare" word nibblenip, meaning, naturally, "to nibble and nip." The illustrative quote, from a poem of Meredith's (1883): "Haggard Wisdom, stately once, Leers fantastical and trips: Allegory drums the sconce, Impiousness nibblenips."

Maybe that's the word Ron Paul was looking for: "We're nibblenipping at his heels!" It does have a certain ring to it.
*The quoted lines will hardly recommend him, but Meredith wrote (among many other things) a comic-romantic-feminist novel every bit as deserving of a miniseries as "Jane Eyre" or "Sense and Sensibility." "Downton Abbey" is all very well, but every year I'm amazed that there's still no screen version of "The Egoist."
Posted by Jan at 10:33 PM 12 comments:

Listening to the news this morning, I heard an item about Gov. Andrew Cuomo's backing for a proposal to establish a casino at "the Aqueduct racetrack" in Queens. Pronounced AH-kwuh-duhkt,* with the a of "father"  in the first syllable.

I nudged my husband, a New Yorker whose artist father used to supplement the family income by manning a parimutuel window in racing season. "How do you pronounce that racetrack?" I asked. "AK-kwi-duhkt,"* he said, using the a of "pat" and "sack." 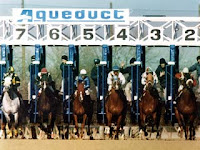 That's how I say it, too -- and I'm a Midwesterner with no connection to racetracks beyond a typical history of girlhood horse-craziness.  But I don't think I would have noticed the AH pronunciation if the aqueducts in question had been Roman waterworks. Aqua, in my dialect, starts with AH, so aqueduct, when it isn't a racetrack name, could reasonably do the same.

But what do I know? According to Charles Harrington Elster, author of "The Big Book of Beastly Mispronunciations," all the AHs would be better as AKs. When he published the first edition of his book, in 1999, the only aqueduct pronunciation American dictionaries recognized was AK-kwi-duhkt, in his transcription, or ˈækwɪdʌkt (IPA, or so I hope as I type).

By the time of his 2005 revised edition, he reports, things were changing. Some dictionary editors had been "seduced by the popular, broad-a variant." Not only that -- Encarta and the New Oxford American were listing the upstart first! Most dictionaries,  however, "continue to countenance only AK-kwi-duhkt, which has always been and still is the only cultivated pronunciation," he says.

Isn't it only natural for the AK of aqueduct to be gradually overpowered by  the much commoner AHK of aqua? That's no excuse, says Elster;  my AHK-wuh for aqua is just an earlier example of "uncultivated" pronunciation. It wormed its way into American dictionaries only in the 1930s, spread by people who had studied a little Latin and took to pronouncing aqua in what Elster calls a "faux-Latin" style. By this account, aqueduct is following aqua down the road to pronunciation hell.

Elster would like us to use AK (ack!) for all the initial-stress aqua words, which would certainly be neat. But just like those early-20th-century Latin students, we pick up words at different times and places, not in orderly family packs; we don't sort our pronunciations by etymology. I say aquaculture and aquatint with AH, and aquifer and aquiline with AK -- who knows why? A discussion of the question at Wordnik last summer showed I'm not alone:


I just realized that I use /æ/ for "aqueduct" but /ɑ/ for "aqua", which seems terribly inconsistent of me.

The classicist in me insists upon 'a' as in 'father' for both.

Maybe Americans will eventually give all the aqua words an initial AH sound, with New York's Aqueduct, as a proper name, holding out till the last. Or maybe not. If you feel like betting, $2 on Uncle Smokey in the seventh might be a safer play.


*Since I quote Charles Harrington Elster below, I've used his phonetic representations.
Posted by Jan at 8:43 PM 20 comments:

A couple of months ago, I upgraded from a perfectly fine pedometer to Fitbit, which can track not only steps but also (it says) the quality of your sleep, synching it all to your Fitbit log. It works as advertised, but I've been letting it slide lately, with all the holiday distractions.

Could be the normal post-honeymoon crash, of course. Self-improvement plans can be fascinating for a few days -- me, it's all about me! -- but they tend to lose their luster as the real world comes back into focus. In this case, though, I think Fitbit's web folks have to share the blame. Whenever I log on to my "dashboard," I see this annoying personal message in the right margin of the page:

You don't have any friends yet.
Find friends. [link]
"You don't have any friends." Seriously. I would understand (maybe) if Facebook nagged like this -- FB is all about friends, and I barely check in often enough to qualify as a lurker. But Fitbit's job is to help me keep moving, not prod me to bore my friends (yes, they exist) with daily exercise stats.
No doubt there are crowds of Fitbit friends out there, spurring each other to ever higher mileage totals, and if it works for them, who could object? But Fitbit, it's bad manners and bad business to insult customers who prefer not to share. You don't want to be remembered as the guys who put the "bitter" in Fitbitter.
Posted by Jan at 11:00 PM 4 comments: